Memorials are a special way to honor the special bond that many of our members have shared with their Springers and with ESRA. Families often encourage gifts to ESRA in their loved one's memory. The family will be notified of each contribution as marked on the donation form.

ESRA is saddened to learn of the passing of a very special friend – Martin “Marty” Kvidera.

Martin was born on a farm in central Iowa. His love for animals came early on for him. His parents, Roy and Betty, raised purebred German shepherds, and through the years of raising and loving those puppies and then the adult dogs, Martin knew he would need the love and companionship of a dog in his life. Of course, college came first. He was a graduate with honors from the University of Northern Iowa, and he later received an MBA from the University of Minnesota.

While working for the state of Minnesota, Martin was able to purchase his first home. The next most important purchase was that of his best friend, an English Springer Spaniel puppy named Tucker. Martin loved everything about Tucker, and together they made their house a home. They enjoyed playtime, walks in the neighborhood, time at the dog park, and, of course, road trips to Iowa to see family and friends.

Martin and Tucker shared a very special bond and enjoyed many good years together, but when his friend passed away, Martin was devastated. After the sadness began to ease, he knew he needed another new “best friend,” so the search began for his next Springer. He loved the loyalty, friendliness, and unconditional love and devotion that this breed of dog gives. In the years that followed, Martin rescued two more English Springer Spaniels, Toby and Bo. His dogs were his family, and he loved each one with all his heart. Prior to his passing, Martin made his wishes known that he wanted to be buried with the cremains of Tucker, Toby, and Bo. A dear friend adopted his most recent companion, Beau.

Martin was very generous throughout his life, and he believed that all animals were deserving of a chance at a good life and a happy home. With his passing, he provided generous funds for three charities: The Nature Conservancy of Minnesota, Safe Hands Animal Rescue of Minneapolis, and English Springer Rescue America, Inc. (ESRA). ESRA is grateful for this very generous bequest to help with the rescue, rehabilitation, and rehoming of Marty’s favorite breed, the English Springer Spaniel. 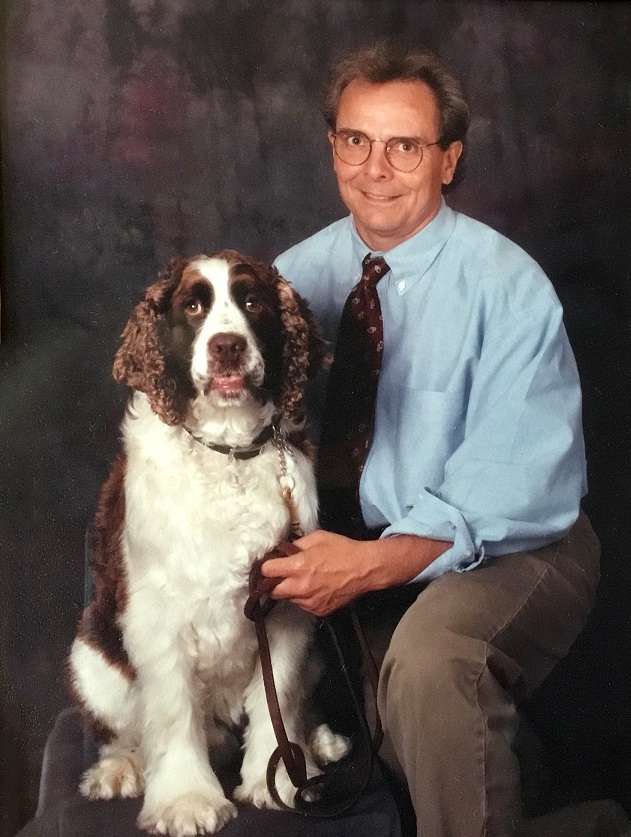 You may make a gift to ESRA in Martin Kvidera's memory using our
online donation form. 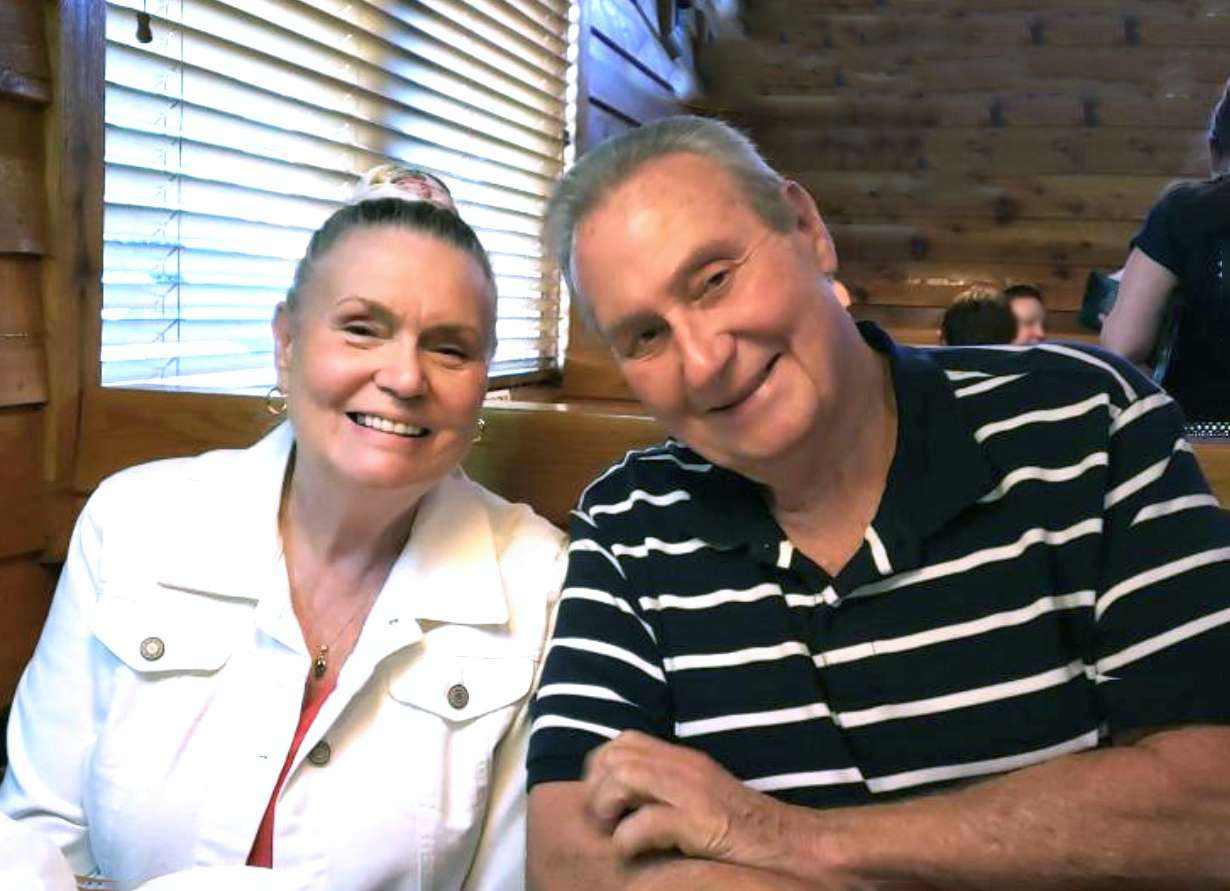 The rescue community mourns the loss of a dear friend and rescue volunteer, Bill Sterling. Bill leaves behind his wife, Elizabeth (Gay) Sterling, daughter Tina, step-daughter Summer (and her husband, Brad), and granddaughter Everly along with Bill’s extended family.

Originally from Silver Spring, Maryland, Bill served as a police officer there in the motorcycle division. He had met Gay in high school as a young teen, and they reconnected many years later. They were wed in 1988. Eventually, the couple set off on their adventure together out West, where they took up residence in San Jacinto, California, living there for almost 20 years.

Bill and Gay have been pillars of the rescue community in their Southern California home for over 16 years. They have fostered 136 dogs, including two sets of puppies (three in each litter) and eight sets of bonded pairs. Oh, how they loved fostering! They continued to do this vital work until just a few years ago, when Bill’s health started to decline. Through the years, Bill also conducted hundreds of adoption interviews, and he loved talking to the people who were interested in adopting his and Gay’s fosters. He wanted nothing but the best for each of these dogs, and he felt that by participating in the interview process, he would really get to know the applicants. He could then make the best match possible for “his” pups. Bill stayed in touch with many of his adopters over the years, checking to make sure that all was well with the dogs and their families. He was also an effective fundraiser for ESRA, bringing in many generous donations which helped to secure the welfare of generations of dogs.

We extend our deepest sympathy to Bill’s loving wife and his entire family. We also share our sincere gratitude for all that Bill and Gay have done to help ESRA and so many dogs in need. Without a doubt, they have not only touched the lives of their fosters but also the lives of all the families that they have selected along the way to provide loving, caring homes for all of these special Springers.

You may make a gift to ESRA in Bill Sterling's memory using our
online donation form.

ESRA is very sorry to share the passing of Michael Douglas Via, Sr. Michael was very well-known to the rescue community in the Midwest and particularly in Michigan, having served this organization for over 15 years with his wife of 40 years, Geralyn (Geri).

As a volunteer, Michael, along with Geri, fostered many Springers of various ages and temperament. Three of them never left their sides, as they formally adopted Special Needs dogs Quinn, Buddy and Brady. There were many more that barely made it to adoption, because Michael had such a soft spot for many of them and wanted to adopt even more! His wife Geri reports that her kind-hearted husband was her “weak link” when it came to fostering. He loved spoiling all of them and enjoyed having them spend time on the couch with him watching sports and dishing out tasty treats. In addition to fostering, the Vias have done many long-distance transports and even helped to whelp a litter of seven puppies that were born to a foster Springer under their care.

As a member of the Ortonville, Michigan, community, Michael was a Program Sales Manager with Toyoda Gosei. One of his true passions, however, was that of portraying Santa Claus. At the time of his passing, Michael had been attending Santa School in Frankenmuth, Mich. A University of Virginia Alumnus and an announcer for the Brandon Blackhawks Football team, he was also a former coach of BGO soccer and T-ball.

Michael’s sudden passing has come as a shock to all who have known and loved this special man who was so very generous with his time and his heart.

Michael is survived by his wife, Geralyn, children Christina and Michael (Theresa), father Marvin Lee, sister Vicki and brothers Timothy and Dennis. The family has shared that memorial contributions may be made to the American Heart Association, Juvenile Diabetes Research Foundation or English Springer Rescue America, Inc. 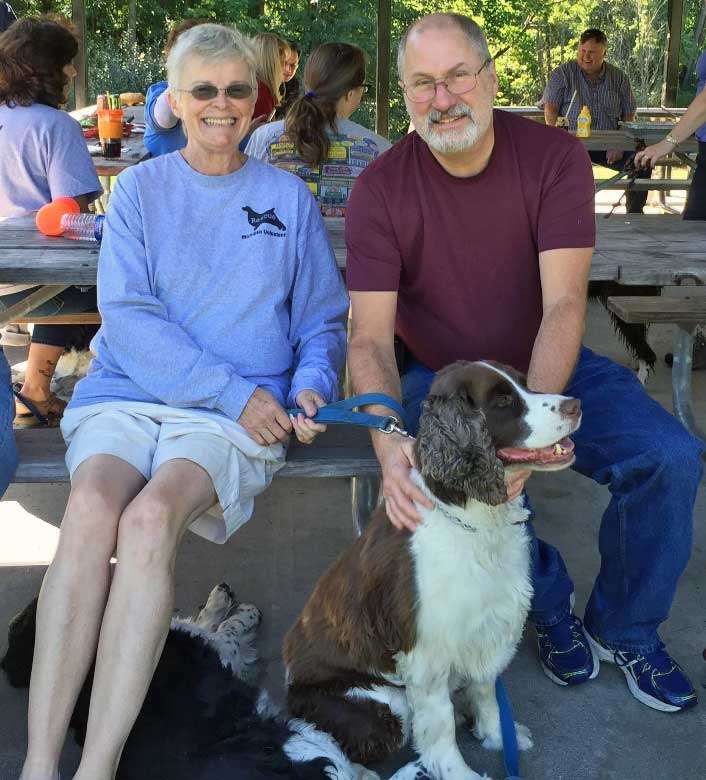 You may make a gift to ESRA in Michael Via's memory using our
online donation form. 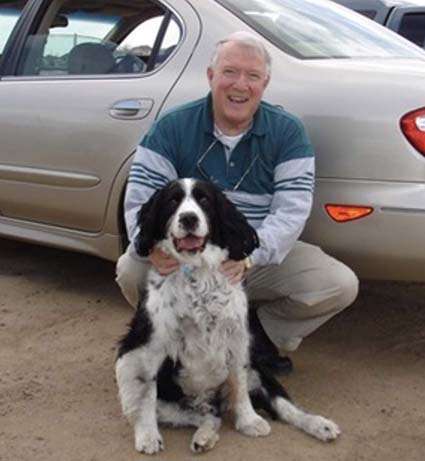 Bill and his wife, Sally, have been involved with ESRA for many years, and have been known by many long-time ESRA members and friends by their fostering and adopting of a very special Springer named Lucky Willie Butler in 2006.

Lucky’s story was one of unthinkable neglect and abuse. While Bill and Sally awaited their first foster, they came to know of this poor sweet soul who was found bound in a blue blanket, in the thick of a forest and covered with heavy logs to keep him from moving. He was found, miraculously by the grace of God, starved at only 22 pounds, by a hiker who could barely hear his cries.

The rest of the story is history, as Bill and Sally fell in love with Lucky and formed an incredible bond with him. Bill often wrote of their experiences together and enjoyed sharing their adventures with people all across the globe. They shared 6 very special years together until Lucky’s passing in 2012.

The kindest of men, Bill gave back to the community first by teaching, then later, by building a career with IBM that even lead him to working with the US Government and NATO. He later began a career in consulting in the early 1990’s, assisting companies small and large with strategic planning, executive management, and in some cases, acting in the role of CEO. During that time, he was also selected by the Colorado Governor, Roy Romer, to serve on the Colorado Commission on Information Management.

In 2012 Bill was inducted as a Penn State Alumni Fellow for his work with the University on several fronts including establishing a scholarship named for his mother (The Lelia Farrell Education Scholarship) as well as working closely with the University to bring in a “soft-box” for their pole vaulting boxes after the tragic death of pole vaulter, Kevin Dare.

Bill shared his love for his family, flying private aircraft, serving the community and rescuing Springers with people throughout the country, and we extend our condolences to Bill’s wife, Sally, his daughters, Wendy, Tracy, Rebecca and their families, his brother Chuck, and to all who knew, loved, and respected this very special man. The world, and the Springer community, was that much richer for having known him.

At the family’s request, donations in Bill’s honor can be made to English Springer Rescue America, Inc. or the Lelia Farrell School of Education Scholarship at Penn State University.

You may make a gift to ESRA in Bill Farrell's memory using our
online donation form.