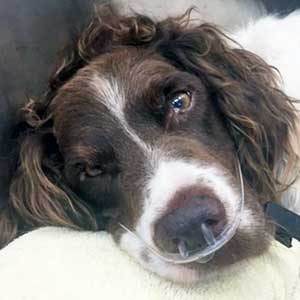 ESRA has offered assistance to a Springer in Naples, Florida, who has become quite the media sensation in the Collier County area over the past two weeks. On July 18th, a local Animal Control Officer found Quinn after this charming Springer had been hit head on by a car. The ACO rushed him to nearby Emergency Pet Hospital where the seriously injured boy received immediate care and overnight observation. The next day, he was transported to the Collier County Domestic Animal Services (DAS) for continued care. However, his needs were too great, and DAS astutely recognized the pup needed a facility that was even more equipped to handle the nature of his injuries and complex medical issues.

He was in dire straits, and we weren't sure he was going to make it. Some of his injuries included pulmonary contusions (bruised lungs), head trauma, fractured ribs, an abdominal tear (hernia), fractured left elbow, multiple wounds and abrasions, and the inability to stand or walk. Additionally, he needed a urinary catheter, oxygen, and 24-hour monitoring due to the critical nature of his injuries. The amazing staff at Animal Specialty Hospital (ASH) in Naples, FL, stepped up to provide this progressive care, and our boy is still under ASH's around-the-clock medical management.

The incredible kindness and concern of the staff at DAS and ASH led to a widespread search for Quinn's owner - including a feature on the Channel 4 Fox News. Everyone involved did all they could to reach out to the community to try and locate his owner. Additionally, since his owner never stepped forward, DAS volunteers set up a GoFundMe account to assist with the medical expenses that have incurred as a result of his very costly medical treatment and extended stay at ASH. DAS has even been kind enough to pledge any excess funds to Quinn's continued care.

Within a week, Quinn started showing quite a bit of improvement. He was bright, alert, and responsive. He began eating and drinking on his own, breathing independently, and propping himself up a bit. On July 28, the dedicated team at DAS transported him to Specialists in Companion Animal Neurology (SCAN) for a neurological consult. It was the first time he had been outdoors since his stay with ASH. He seemed to enjoy the fresh air and his spirits lifted. It was there that we received very positive news about his recovery. The veterinary neurologist did not believe an MRI was necessary, and he believed our boy would walk again and eventually make a full recovery. There also did not appear to be any trauma to his spine at the time of his evaluation.

Quinn was taken back to ASH later that day where he underwent repair of his abdominal hernia. He was also neutered free of charge, compliments of ASH! We cannot say enough good things about the folks at DAS and ASH. To add to the long list of things for which we are thankful, one of the staff nurses at ASH has become so taken with Quinn that he has offered to foster him for ESRA and provide him with the extra care and physical therapy needed to ensure a promising recovery.

As a couple more days have passed, we have more good news to report! With assistance, Quinn is now standing and was able to go outside. He relieved both his bowels and his bladder on his own. He did show some pain in his hind quarters though, so one of his board-certified surgeons repeated pelvic radiographs and noted moderate arthritis in his hips. She also believes he has a contusion in one of his lumbar vertebrae. She and the neurologist at SCAN have concurred that it will most likely heal in time. This is all very positive news for a Springer that just a couple of weeks ago had a very grave prognosis.

While Quinn may be out of the woods, he still has a long way to go and still needs to undergo orthopedic surgery to correct the fracture in his left front elbow. In spite of everything he has been through, this boy remains exceptionally sweet, tender, and loving. Even though in discomfort, he still rolls over for belly rubs from his caregivers. Your continued prayers, well-wishes, and donations ensure we keep him on this path to a full recovery.

We are so grateful to the ACO who acted quickly and got him to safety, to all of the staff at DAS, ASH, and SCAN, Quinn's foster dad and his many supporters. The story of this boy has touched us all, and we intend to see to it that its final chapter is one with a very happy ending.

UPDATE 8/7/17: The Mighty Quinn has experienced much progress in his recovery. This past

week, he underwent orthopedic surgery to correct the ulnar fracture in his left front leg. The break was such that it required the placement of a plate and six pins at the fracture site. His surgeon believes that a good alignment of the break was established, and a cast was placed on his leg to aid in the recovery process and protection of the surgical hardware.

Quinn must have limited activity until he is completely healed, which is anticipated to take 10-12 weeks. Quinn will need physical therapy for many weeks to ensure that his leg is being used, but that he does not overdo it. The muscles need to strengthen gradually as the healing process progresses slowly and steadily.

While Quinn has undergone so much and has endured much pain and discomfort as a result of his accident, surgeries, and the recovery process itself, he remains the sweetest boy with the most determined spirit we have seen in quite a while. It's as if he knows that he has the support of the Springer community behind him ... cheering him on and patiently waiting for additional reports on his continued improvement. Stay strong Mighty one! We are all so proud of your accomplishments in the past couple of weeks, and will continue to pray and send positive thoughts to you as you get past the hurdles that the next several weeks are likely to bring.

We are extremely grateful to Quinn's many supporters, his foster dad, and the staff that works with him daily to ensure that better days are on the horizon.

What a difference a week makes! We are so happy to report that that Quinn's surgery has proven to be very successful so far. In fact, within just 9 days, we are able to share this video with you that depicts just how well he is recovering. His cast has been removed to aid in his mobility, and his leg remains quite stable as a result of the inserted plate and pins holding the bones together. His miraculous recovery is certainly a result of his determined spirit and the extraordinary skills of his surgical team and rehabilitation staff. Please continue to watch this page for future updates of our Mighty Quinn. We are thrilled to be able to share his amazing progress with you all.

Marvelous Mighty Quinn continues to recover at a remarkable pace! He is now in foster care and no longer a temporary resident of the specialty hospital. His doctor is pleased with his recovery and thinks that his suspected hip dysplasia and arthritis may, in fact, be only a symptom of the pain from all his injuries. His chest X-ray looks great, and he is completely off all pain medication too.

Quinn continues physical therapy and is coming a long way in his mobility. At one point a custom brace was discussed to facilitate the healing of his left front leg because nerve damage in that leg was allowing him to hyper-extend his carpus. However, as he continues to heal, that seems to be correcting itself too, and his surgeon feels that having a "crutch" in the form of this brace may actually hinder his healing rather than help it.

All the while, this dear boy continues to be happy and very determined to live a normal life. He is well on his way, thanks to all of the support he has received from all of his very kind and generous followers. Once again, we can't express our gratitude enough.

Well, the time has come. Quinn's recovery has been so remarkable that he is now ready to look for his Forever Family! He has continued with his therapy and has made great progress in the past couple of weeks. We are hoping to find an adopter willing to continue with his physical therapy for the next several weeks at least, to ensure the continuation of his successful recovery.

Quinn is a very sweet boy who would do best in a quiet home, where the activity level of his family is a laid back without too much commotion. A home without small, excitable children would also be in his best interest and would be instrumental in his continued recovery.