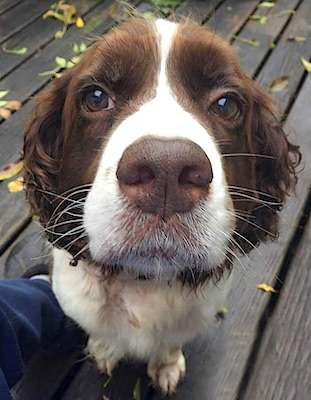 Poor, sweet Peyton! This pretty senior girl was turned over to ESRA by her owner last fall. She has been dealing with some very serious medical conditions ever since she entered our program, so it has been ESRA’s focus to help her to feel better by working to combat her health challenges. 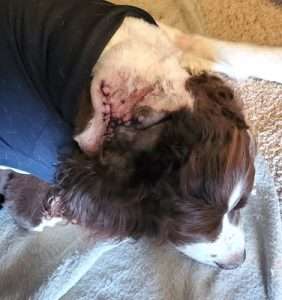 Currently being fostered in a small town in southeast Minnesota, eleven-year-old Peyton came into our care as a retired breeding bitch. She was riddled with mammary masses and presented with puncture wounds around her neck. These were reported to be old wounds that would not heal. Peyton’s mammary tumors were assessed, and the bite wounds were also addressed and cultured. She began treatment with a routine broad-spectrum antibiotic.

Within a couple of weeks, Peyton’s mammary masses were removed. Probably the best news so far for this girl is that her pathology report came back benign! This was a huge relief for her caregivers. Unfortunately, the wounds on her neck were not responding well to the antibiotic prescribed. The culture report revealed the presence of Corynebacterium with diphtheritic membrane formation, which is very difficult to treat. There is only one antibiotic that has been known to effectively fight this otherwise-resistant bacteria, so Peyton was started on it immediately.

Over the course of the next several weeks, her neck wounds were carefully monitored for signs of change. Unfortunately, things were not healing as we hoped, and Peyton had to undergo extensive surgery to clean up a few of the wounds. This might seem to be a simple procedure, but it was not. The type of infection that she has creates a web-like membrane of connective tissue that acts as a barrier to antibiotics. Her surgeon likened the “clean-up” to the equivalent of trying to scrape dried gum out of a person’s hair.

At the end of January 2020, Peyton had her sutures removed, and everything was looking good. After six weeks, however, one area of her neck was still showing signs of infection. She was prescribed three more weeks of the potent antibiotic that she had previously taken. Unfortunately, within a matter of days, blood work revealed that Peyton was having a negative reaction to the antibiotic, which was raising her liver enzymes. She was taken off the drug immediately and was prescribed a new antibiotic that was probably not going to be as successful in the treatment of this very stubborn bacterial infection, but we had no other choice. 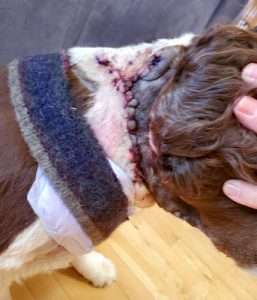 By the end of April, Peyton was once again put under anesthesia to address horrible dental issues. The result was the extraction of five teeth along with another extensive clean-up of three more puncture wounds that were resisting the antibiotic treatment. By the next day, the surgical incision was very swollen and Peyton’s packed cell volume (PCV) blood level had dropped significantly, indicating a low red count level and possible blood loss. Once again, Peyton had to undergo an emergency surgical procedure to locate the source of the blood loss. A large blood clot was found and removed at that time.

In mid-May, most of Peyton’s sutures were removed from her neck, but some had to remain for added healing time. Her PCV levels had increased to a more suitable level, however, and additional antibiotics were prescribed.

You might well wonder how Peyton is dealing with all of these trials. Truthfully, she is just a love! A very sweet, non-dominant girl, she is just happy to be with her humans. She gets along fine with the other female Springer in her foster home, and she can be found cuddling with her head on her foster mom’s lap most evenings. In spite of her numerous surgeries and what must be a somewhat painful condition, Peyton still enjoys long walks on the acres of trails that are part of her foster family’s property. She certainly is quite spry for a senior! You would never really know that she is eleven years old.

As you can imagine, Peyton’s numerous surgeries have come with quite a hefty cost to ESRA. As with other dogs like her, we have made a commitment to getting Peyton the care that she needs. Your support of Peyton through your generous donation to ESRA is greatly appreciated. This support will ensure that she can live out the remainder of her life as a happy, healthy, and very lucky lady.