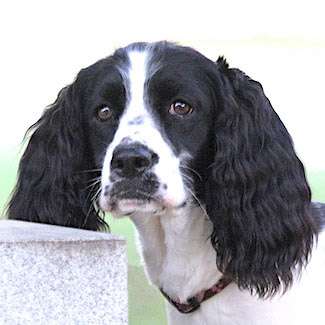 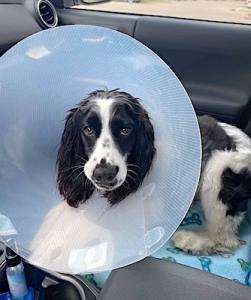 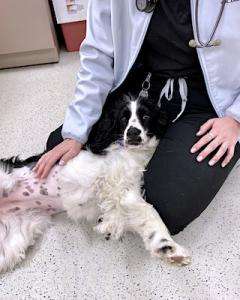 As a result of a major change in her family’s life, sweet Minnie was surrendered to ESRA as a puppy. She is living proof that big things certainly come in small packages! This petite fourteen-month-old girl weighs just thirty pounds, but she is loaded with field-bred puppy energy. She is eager for attention and is way too smart for her own good!

On the exterior, Minnie appears to be a healthy dog. Running, playing with toys, counter surfing, and tumbling with other dogs, she at first seemed like any other puppy her age. Unfortunately, there were signs that she might have medical issues, and ESRA and her foster family, who plan to adopt her, have devoted the past few months delving into what those issues might be and putting corrective measures in place.

One of the first things her foster family noticed was that Minnie was experiencing urinary incontinence when she became excited or nervous. This was on a larger scale than many dogs with this issue exhibit. Minnie was taken to the vet for a urinalysis to rule out a urinary tract infection. The results came back normal, and it was assumed that she was simply experiencing spay incontinence, a common occurrence after a spay procedure. However, Minnie’s incontinence began to increase, so it was decided that more testing was needed to be sure that nothing more serious was going on with this little girl.

An ultrasound revealed what appeared to be an underdeveloped kidney, a congenital condition called renal dysplasia which can occur in one or both kidneys. Fortunately for Minnie, only one kidney was affected. Minnie was also diagnosed with an inverted vulva. A recessed vulva puts a female at high risk for urinary tract infections as the skin folds often trap urine. This leads to a warm, moist environment which allows bacteria to proliferate. Because Minnie had only one functioning kidney, the internists recommended that she have a vulvoplasty (also known as an episioplasty), a surgical procedure to correct the defect/structural formation of the vulva. This would benefit her one healthy kidney. 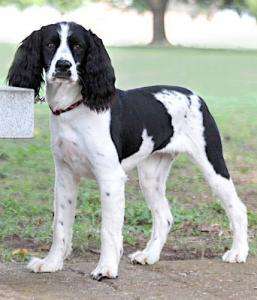 Needing to gather additional information, Minnie's foster family scheduled a consultation at Texas A&M University, which involved overnight travel for them. During the ultrasound, her internist was unable to find her two ureters, the tubes that connect the kidneys to the bladder and by which urine flows. The family was told that sometimes when there is a congenital defect present, additional defects are found. There was concern that the ureters were abnormally formed and perhaps not attached as they should be. That might explain Minnie's incontinence. Such a defect could possibly be repaired via laser. The surgical staff at the university recommended that Minnie have exploratory surgery to find out exactly what was going on. They would also be able to perform the resection of her vulva at the same time. Luckily, they were able to schedule Minnie for surgery the very next morning.

Minnie did well through the surgery and has a very good prognosis! It was discovered that her ureters are fine and are functioning properly, but she does have an abnormally short urethra, which is contributing to her incontinence. She will most likely be on a combination of medications for incontinence the rest of her life. However, there is good news! There is current, ongoing medical research for this specific issue. The study is not yet complete, but it does show promise. During the surgery, the doctors were able to repair Minnie’s recessed vulva, which should greatly help to keep urinary tract infections at bay. Her caregivers do expect that she should have a long and happy life, providing that she does not have recurrent chronic urinary tract infections.

ESRA is grateful for the support that Minnie’s caregivers and veterinary staff have provided to help ensure that her future is healthy and bright. She is the sweetest girl, and she certainly deserves a long life full of love, comfort, and typical Springer activities! We are also grateful for those friends of ESRA who are expressing their concern by providing financial support to help offset the thousands of dollars of medical intervention she has needed to help her on her way to recovery.

Special note: ESRA is only able to list donations made through our website here on Minnie’s Special Needs page. Donations through Facebook are also greatly appreciated but we are unable to post those names. Many thanks to all of Minnie's supporters!