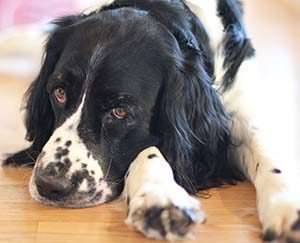 Pretty little Meggie Mae of Dallas was brought into ESRA's care in December of 2017. This little girl's life has had its fair share of ups and downs from that time on.

Sadly, her owner of many years passed suddenly last year. She was extremely bonded to him, and they were inseparable. His family reached out to ESRA, and we agreed to bring her into our care and begin the search for a loving home. For a middle-aged, very active healthy girl, this would not have been a difficult task at all, yet outward appearances do not always portray an accurate picture.

At now almost 7 years of age, Meggie had come to ESRA as an intact (non-spayed) female. There was a short waiting period to have her spay done while in foster care because she had come into heat. Once that cycle had completed, she was spayed. Unfortunately, complications arose in the form of a hematoma, and she needed to recover from that. During the recovery period, a couple of small masses were discovered along her mammary chain (for those not familiar with the term, the mammary chain is part of the female dog's reproductive system -- the breasts and surrounding tissue encompassed). Because it

is widely documented that intact females can be at greater risk of developing mammary gland cancer, we opted to have the masses removed and submitted to a lab for a pathology report. Unfortunately, our concerns were not unfounded and shortly after the removal of these masses, a diagnosis of mammary adenocarcinoma, Grade 2, was given: Cancer. Our worst fear had been confirmed, and now a decision had to be made on just what to do.

A couple of treatment options were provided, and a bi-lateral mastectomy was recommended by her veterinary specialist/surgeon of Veterinary Specialists of North Texas. The removal of both mammary chains with as much tissue as needed to provide clear margins (no cancer), is a complicated surgery with a difficult recovery. However, in a young, active, otherwise healthy female, it can often be a better option, providing a faster full recovery with less chance of the cancer spreading than if

done in two separate procedures. As luck would have it, while Meggie has recovered from the removal of the two initial masses, another small 2 mm mass has presented itself in the mammary chain on the opposite side of the first mass removal. While this type of cancer can progress rapidly, it has been caught in the early stages in Meggie, and radiographs have revealed that the cancer appears to be contained to the mammary chains only. Hence our decision to go forward with the bi-lateral procedure.

Along with complications from this type of surgery comes quite an expense for the surgical procedure and post recovery. ESRA is committed to providing Meggie with the best option to ensure a bright and healthy future. With the help of ESRA's financial supporters and those who offer continual encouragement by sharing their success stories and their good thoughts and prayers, we are hopeful that we can provide Meggie Mae a future filled with many bright and happy tomorrows.

Your support, either financially or otherwise, is greatly appreciated during Meggie's time of need. Her surgeon seems hopeful that we can provide her with a future typical of any healthy Springer her age, and we are committed to helping her achieve just that.

After a very long day waiting her turn for surgery at the Veterinary Specialists of North Texas, our little Meggie has undergone the bi-lateral mastectomy yesterday afternoon. She is recovering there and will be heavily sedated and monitored

for the next couple of days. The recovery from this type of surgery can be grueling, but the staff at VSNT are committed to keeping her as comfortable as possible. Now for the good news: NO MORE SURGERY! Meggie's surgeon has shared that he was able to remove both mammary chains in their entirety. An additional surgery, which there was a chance of, will not be needed. There were no complications, and any masses that were found were tiny and removed in the early stages of their growth. It is important to have clear margins around the surrounding tissue, and we believe this has also been achieved. The pathology report should provide more details in approximately one week. What a relief!

While it certainly seems true that "all things happen for a reason," we often come to realize that even negative events in our lives can come with positive results. We are hoping this is the case for Meggie. The event that led to her need for coming into ESRA's care might possibly be the one thing that may have saved her life. Left undetected or untreated, mammary cancer is often deadly. Had her cancer continued to spread, there is no way of knowing how long she may have been with us. That is all behind her now, and as her recovery begins, we want to extend our gratitude to all her supporters. Your donations, well wishes, and continued prayers for a successful recovery are very much appreciated.

Meggie has continued to do beautifully through her recovery and has far exceeded her foster mom's expectations given her "youthful" energy level! The pain meds, combined with an anti-anxiety medication, have kept her quiet and calm. She has also tolerated being restricted to a crate for much of the day and wearing the Elizabethan collar to prevent her from licking or chewing at her sutures. She is only allowed very short breaks outdoors (on leash) to keep her activity level to a minimum. Her foster mom makes sure that Meggie does not climb stairs or try to jump up on furniture. Both could be harmful to her at this stage of her healing.

Unfortunately, Meggie suffered a slight setback last week. She quit eating and was clearly in tremendous pain. She was immediately taken to see her surgeon, who determined that some serum had collected at her surgical site and had become infected, a common post-surgery complication. She was put on antibiotics, and her pain medication was adjusted, along with receiving instructions for additional wound aftercare. Just a week later, she is healing well. While her sutures were scheduled to come out this past week, her surgeon has recommended that we wait one more week for their removal. They will be removed on May 24.

We have also received the results of the pathology report from Meggie's oncologist. Overall, everything looks great! All cancerous cells appear to have been excised; however, a couple areas have very narrow margins of clean (non-cancerous) tissue, and this could leave Meggie at risk for the cancer to reoccur. Two treatment options were discussed. One option would be an additional surgery to remove more tissue in these areas. Option #2 would entail a few radiation

treatments. A consult has been scheduled for this week to discuss these options in more detail, get an estimate on the cost of each treatment option, and to help decide which treatment option would be best for Meggie and her future. Neither option is something we had wanted for our brave little girl, yet we did know that each might be a possibility.

While Meggie improves each day, we continue to be grateful to her caregivers and supporters. Many thanks to each of you. She has continued to amaze us all with how well she is recovering and with her sweet and lively spirit. Please continue to visit this page for additional updates on Meggie's progress.

We are pleased to report that Meggie Mae has healed from her very complex surgery and is feeling like a new girl! Her incision has healed nicely, she no longer wears the e-collar and, her foster mom reports, she is 100 percent Meggie again -- back to the happy, very energetic, and lively girl she's always been. Her appetite has also returned, and she is acting like a dog half her age -- racing through doors to beat the other resident dogs outdoors to chase the squirrels! An ear infection that she was harboring, due to the heat and moisture that had been retained in her ears while wearing the e-collar, has also been resolved and she's feeling fabulous!

While we are very happy about her progress, the final chapter of her battle to beat cancer once and for all has one step yet to go. Beginning next week, Meggie Mae will undergo 4 rounds of radiation therapy -- one each week, under sedation. While there is always a concern about sedating a dog too often, her oncologist believes that these four treatments will put the cancer "to rest" for good! During treatment, she should feel no ill effects, other than a little redness and the possibility of slight irritation at the targeted area of the radiation at the lower mammary area.

We couldn't be happier to share this news with you and to be just weeks away from knowing that a promising future lies ahead for this sweet girl. Her life has completely changed because of your kindness and generosity, and we share our never-ending gratitude. Meggie, too, shows us just how happy she is. If you can't find her barking up a tree, you can otherwise find her snuggled up next to someone on the couch or pawing and nuzzling at them for more affection. Now THAT is one happy ending!

We are happy to share our fourth and final update on sweet Miss Meggie Mae. Meggie has completed her final radiation treatment this week and has handled each of the four rounds beautifully with absolutely no side effects. She was released from her appointment this week sporting her cancer treatment graduation bandanna signed with well-wishes from the staff. Between her bilateral chain removal and her four rounds of radiation, her treatment is complete! She will require a follow-up visit with the oncologist in 2 weeks. Thereafter, she will require quarterly visits for the

next year to be sure all is well. Her oncologist is quite confident that no future problems will arise, but monitoring is a necessity nonetheless.

Finally, to put the icing on the cake, we have more celebratory news to share! Meggie has the most amazing family awaiting her arrival and will soon be moving to New Mexico to join them as a new member of their family! She will have an extra-special bond with her new mom who is also a cancer survivor. Meggie's life will be forever changed as well as her new family's.

Many thanks to Meggie's caregivers, surgeons, specialists and new family. Our extreme gratitude goes out to all her donors and those who have shared support in so many ways while this brave girl battled the unthinkable. She is a true survivor, and we all know that she could have never come this far without every one of you.