Throughout the course of any given year, ESRA takes hundreds of dogs into its care.

While our membership and followers will often learn of ESRA’s Special Needs designees, there are many that we do not actively fundraise for. However, that doesn’t stop the organization from committing to their care and bearing the financial responsibility of costly surgeries, therapies, and/or other treatment plans to help them achieve the same happy ending as every dog in our care. We call this going “the extra mile,” and while ESRA does not solicit funding to help offset the expense of caring for many of these dogs, we do it willingly and with every intention of changing the lives of these very deserving dogs.

Following is the story of one such Springer that ESRA has committed to in hopes of brightening his future and giving him the best chance at a happy, healthy, quality life. 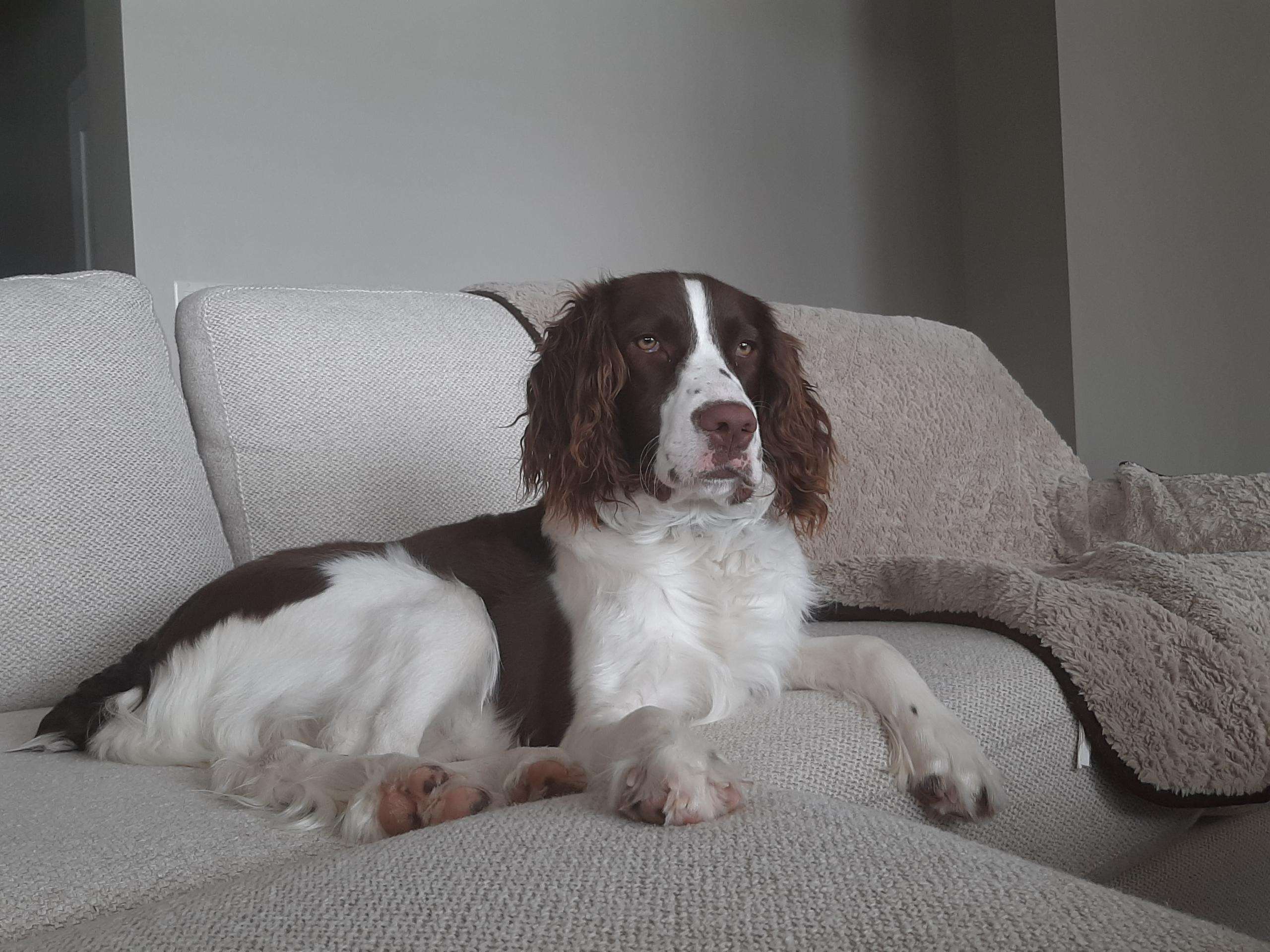 In the fall of 2020, at just 6 months of age, young Murphy came to ESRA as an owner surrender. His owner loved him dearly, but knew, early on, that Murphy had medical challenges that were going to require much more than this family would be capable of providing for him. Murphy had displayed problems with his gait that appeared to be neurological in nature. A complete exam with a neurologist confirmed that this young boy suffered from a severe spinal malformation known as scoliosis. This condition placed excessive pressure on his spinal cord, preventing his back legs from functioning properly. This is a birth defect which, if not addressed, would severely impact the quality of Murphy’s life and, most likely, his longevity.

ESRA, with the help of medical professionals, put a plan of action into place to help Murphy’s mobility. This included placement with a long-term foster family who could commit to his care through his surgical procedure and extensive physical therapy.

The procedure that was required to address his deformity is called a spinal cord laminectomy, and it was recommended that after Murphy’s body matured a bit, this surgery could be performed to decompress his spinal cord and slow the progression of the condition. Prior to the procedure, additional testing (via an MRI or CT scan) would also be needed. Continual monitoring of his activity level was also required to ensure that Murphy wouldn’t overdo it. As one would expect, this young pup did not understand why restrictions were critical to his development, and he loved to play “rough and tumble.”

Murphy underwent the laminectomy procedure in mid-April 2021 to remove the bone and fibrous tissue compressing the spinal cord at his malformation. Initially, his strength and coordination declined post-operatively. This was likely due to his compromised spinal cord suddenly having more space. As time and rest would allow the site to heal, it was anticipated that Murphy would greatly benefit from the procedure. This, in fact, is what has occurred.

For the past several weeks, with the required rest and physical therapy (including several hydrotherapy sessions walking in a pool of water on a treadmill), Murphy has showed signs of significant improvement. Initially, his physical therapist observed obvious weakness on one side of his body. The spinal compression affected one side more than another and he would turn one of his feet out to one side. It was felt that he was experiencing neuropathy – a condition where he could not feel his feet. However, after weeks of physical therapy, his therapist and surgeon are very encouraged by his progress. His long-term prognosis is somewhat unknown, because Murphy's deformity is very rare, but it is currently reported that Murphy is at much less risk now, and his condition has been greatly modified. His life span, barring any unforeseen complications, should be normal.

To see Murphy run, play, and experience a life not that different from any pup his age is testament to the amazing care and commitment that his foster, his veterinary caregivers, and ESRA have provided for him. This is just one more case in which ESRA has gone the extra mile to impact the life of a dog that was deserving of a much brighter future. We are so glad that we have had the opportunity to change his life and are grateful to his amazing foster, his surgeon, and all specialists that have helped him on his way to a better life.