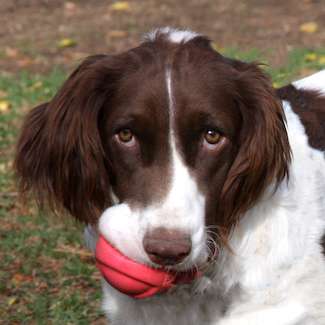 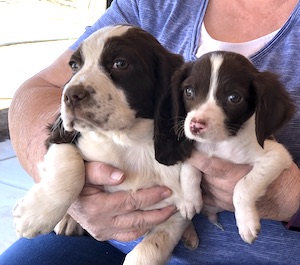 Charlie, right, at 10 weeks with littermate

Sweet, adorable Charlie was taken into ESRA's care as a one-year-old puppy, and he is being fostered in Hemet, California. At first glance, he may appear to be a normal youngster. His spunk and personality certainly parallel those of any other young pup his age. However, his tale of rescue is one that is quite a bit more complex.

Charlie came to ESRA by way of a breeder who contacted us for help with Charlie, who was five months old at the time and was obviously medically challenged. He had a nasty scalp wound on his head that was not healing quickly. His head and jaw were a bit misshapen, and he appeared to have something neurologically wrong with him, as he could not be picked up by the scruff of his neck without that causing him to cry in pain. The breeder also reported that at six weeks of age, Charlie weighed a mere sixteen ounces, although all of his siblings were at several pounds by then. It truly is a miracle that Charlie even survived. That he did so is a testament to his incredible will to live.

When ESRA volunteers went to meet him, it was immediately evident that there was something very wrong with this little boy’s development. He appeared severely malnourished, and he was whisked off to our vet for a complete exam, blood panel, and x-rays of his spine and neck. The findings were as follows:

• Slight anemia, which seemed to be concurrent with his malnourishment (Charlie weighed only eighteen pounds at this point) 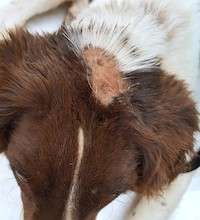 • Pneumonia, for which antibiotics were prescribed

• What appeared to be a narrowing of the space between both neck and spinal vertebrae, as shown by digital x-rays

• A significant overbite, the result of his upper jaw being much larger than his lower jaw

• The wound to his head, which needed treatment with twice-daily applications of antibiotic ointment

Once in foster care, while he was being treated for his injury and various medical maladies, Charlie began presenting a new symptom, a bloody nasal discharge. This fluid was cultured and was found to contain three separate bacteria, one of which was E. coli. New antibiotics were prescribed, and his head wound, pneumonia, and nasal discharge eventually began to clear up. At this point Charlie was starting to feel and act like a typical young pup, probably for the first time in a very long time. He was also gaining some much-needed weight.

As Charlie became more active, however, observation of his day-to-day activity level, personality, and general overall health revealed some new things to his caregivers: 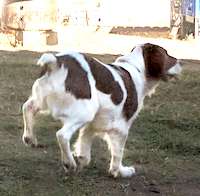 • After too much play, he would have a pronounced limp and would stumble.

• When he would lie down, it was always with a plop, as he was having difficulty controlling his hindquarters.

• When he would hit the ground, he would groan in pain, and he would whimper upon rising.

• It was also observed that his right carpal area (front wrist) seemed weak, and he would lean on his knuckles while at rest.

• He does not have the ability to squat to urinate or defecate as a result of his joint issues.

• He dribbles urine while walking, but he does not have incontinence while lying down. He did not present for a urinary tract infection.

To help with Charlie’s pain management, he was prescribed a low dose non-steroidal anti-inflammatory drug. To further diagnose Charlie’s mobility and incontinence issues, an evaluation with an orthopedic specialist took place in mid-October at VCA/California Veterinary Specialists in Murrieta, CA. It was determined that Charlie has bilateral hip dysplasia that is going to need surgical correction. The specialist also suspects a condition known as ectopic ureter, which is a congenital anomaly in which either one or both ureters bypass the bladder and drain directly into the urethra. This could explain his issue with "dribbling."

Two cost estimates were provided at the end of this consultation/evaluation. One is for a CT scan of the abdominal area to determine the exact cause of the urinary incontinence, and the second is for a procedure called a Triple Pelvic Osteotomy (TPO) on Charlie’s right hip to help correct the condition of hip dysplasia and allow a more normal, pain-free life for this young boy. The TPO procedure was devised to help young dogs, normally under one year of age, by eliminating looseness of the hip joint, improving hip congruity, and normalizing stresses to the joint. The procedure involves cuts in the pelvic bone so that the socket portion of the joint can be rotated over the femoral head (ball portion of the joint). The bones are then stabilized with a bone plate. The hoped-for end result of the procedure is to prevent early onset osteoarthritis of the hip joints.

Unfortunately, while Charlie waits for his TPO surgery to be performed, he has also undergone a neuter that was somewhat less than routine. The poor little guy had a testicle that had not descended, which resulted in a bit more complex neuter procedure than is normal. He did well, though, and is at the end of his recovery and rest period. Even though he continues to have mobility issues, he still wants to act and play like a puppy. Keeping him quiet during the sixteen-day healing process has come with the expected challenges!

Please keep this loving puppy in your thoughts and prayers as the upcoming weeks will present great challenges for him. The TPO procedure is fairly complex, but his surgeons are well versed in this type of surgery and are confident that it will greatly enhance Charlie's quality of life for the long term.

As is typical with most of the Special Needs dogs in our program, making the commitment to care for Charlie comes with a significant financial obligation on ESRA's part. We want to ensure that we do everything we can to help Charlie and other dogs like him live normal, healthy, and happy lives. Your donations help us to do just that, and we extend our heartfelt gratitude for your contributions.

Please continue to watch this page for future updates on this very special little boy.

Charlie has been under observation and has undergone testing to see what, if anything, can be done to help him. His veterinary providers and caregivers have discussed at length the fact that Charlie’s case is not typical of a normal, healthy dog his age. Because of his numerous genetic abnormalities, the decision has been made to hold off on additional treatment for a period of time until it can be proven that he is healthy enough, overall, to endure one or two extensive surgeries. A recent CT scan also revealed that Charlie is not a good candidate for the original procedure that was proposed to help his hips. Rather, a full bilateral hip replacement would be the course of treatment that he would have to undergo if, or when, the time is right for him.

As we continue to watch Charlie’s growth and monitor his medical needs through the next several months, further assessment will be done to decide what steps to take if he proves to be healthy enough to undergo such invasive and extremely costly procedures. Until then, his fosters and veterinarians are providing him with the best of care and are using the proper measures to ensure his comfort and happiness. Please continue to keep Charlie in your prayers and positive thoughts. He still has quite a way to go, and your support is greatly appreciated.