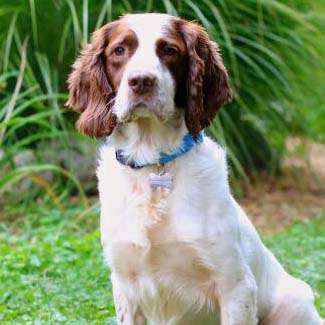 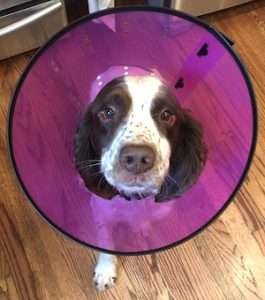 Bowie was found in the woods near Grand Rapids, Michigan by a passerby who was walking his dog. From his condition, it appeared that Bowie, who is approximately six years old, had been on his own for a period of time. He was underweight, had poor dental hygiene, and had not been neutered. He was also initially quite timid with any of the humans who tried to offer him assistance, although eventually he came to terms with his fears and began to warm up a bit.

Fortunately for Bowie, no one came to claim him, so he was relinquished to ESRA. At that point, the commitment to his care and future well-being began. He is learning to trust his human foster family, and he has become quite fond of the man of the house. Bowie is already in much better shape than he was when he was found. He has been neutered and has had a much-needed dental scaling. He is putting on weight, too. It appears that Bowie had suffered from a previous injury to his right rear leg, and while he was playing with the resident dog in his foster home, the condition was exacerbated. Unfortunately, an orthopedic evaluation revealed that our boy has a torn anterior cruciate ligament (ACL). His veterinary specialist has likened it to an old football injury that had just run its course and had reached a point of no return. Bowie needs to have this this torn ligament repaired, so surgical intervention has been prescribed.

ACL repairs can be performed in a few different ways, but a traditional lateral suture repair is what has been recommended for Bowie. This is not as expensive as other types of surgery, and the technique is widely used on dogs that have a good chance at recovery following a rest period of several weeks post-op. The repair uses a nylon line (similar to fishing line) which is wrapped around the unstable joint in such a way that it actually mimics the missing or torn ligament. While the surgery is not overly complex, the recovery period afterward is just as crucial a part of the success of the procedure as the surgery itself. Bowie will need to rest quietly for several weeks to allow scar tissue to build up around the artificial ligament, using the leg minimally at first and then increasing activity and stress to the joint little by little. Most dogs can make a remarkable recovery within eight to twelve weeks, and their quality of life is greatly enhanced as a result of the surgery in contrast to not doing anything at all other than just administering pain medication as a temporary fix.

Since arriving in foster care, Bowie has shown increasing trust in his humans, often seeking them out and craving attention. He has a great life ahead of him if we can just repair the defective knee. With the help of your generous donations, we will be able to see to it that Bowie gets all the care he needs and deserves, so that he will eventually be ready for a Forever Home with a loving family to call his own.


Watch the video to see how Bowie favors his right back leg as he tries to run.

Bowie had the surgical repair to his torn ACL this week. All went very well and he is

now in recovery mode. His surgeon reports that there was a complete tear and some damage to the medial meniscus. He also reported that the injury appears to have been an old one that had flared up as a result of a little too much activity. Bowie also has some arthritis in that joint, which is typical for dogs with this type of injury. The skilled hands of his surgeon cleaned up the area, and a problem-free recovery is expected. Our boy has been a great patient!

Bowie remains as sweet as can be. The biggest challenge that he and his foster family now face is keeping him relatively quiet for the next several weeks to allow the healing process to begin.

Many thanks to Bowie's supporters and to all who have been concerned for him! We are grateful for your positive thoughts and prayers, along with the donations that have made it possible for ESRA to help him.