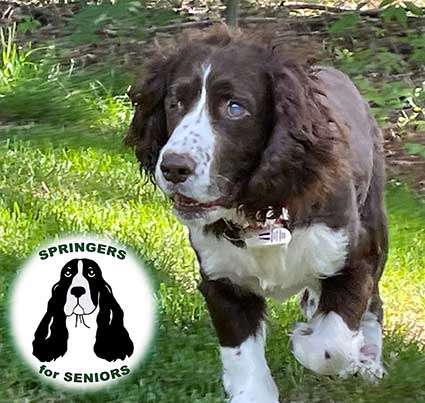 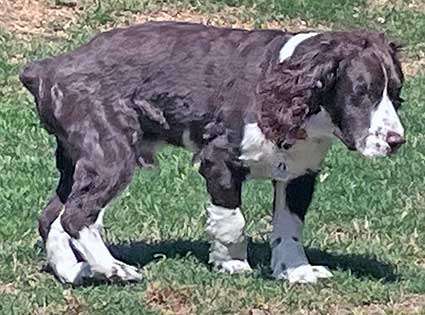 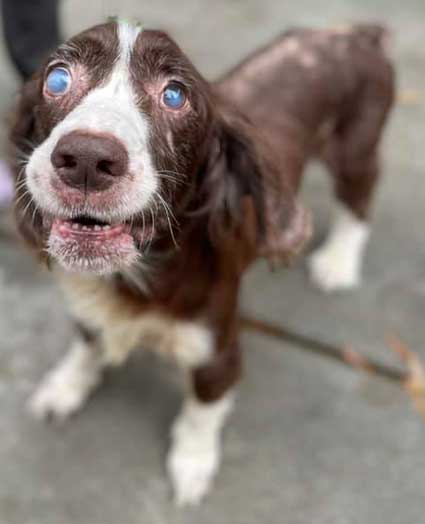 Robert's "before" photo. He has come such a long way!

Several months ago, ESRA took in a sweet senior Springer who appeared to have been a case of severe neglect. He was pulled from a Georgia shelter, with minimal hair and scabs covering 75% of his body. He was extremely thin and very sick. To add to the long list of issues that he was dealing with, he was also blind and experiencing quite a bit of pain from glaucoma and what appeared to be chronic arthritis. There was a point, early on, when his caregivers and veterinarian gave serious consideration to whether euthanasia might be the kindest solution to end his misery.

Fast forward to today and look at this handsome boy now! This is Robert, and it’s almost hard to fathom that he has come so far in such a short time. He is thriving! Under ESRA’s care, all his health issues have been addressed. He has undergone enucleation surgery to remove his right eye, which was causing him the most amount of pain. He was diagnosed with degenerative joint disease (DJD), and he has an advanced grade heart murmur. But don’t tell Robert that he isn’t perfectly healthy! He will have none of that nonsense! 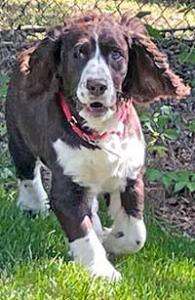 While his vision has been limited to an occasional “glimpse” through an eye with a luxated cataract, he is truly blind most of the time. The floating lens repositions itself from time to time, giving him a quick view that gives him a brief reprieve from his complete vision loss. The condition can be painful, however, and enucleation of his remaining eye will most likely be needed at some point in the future. His heart murmur is treated with the administration of two different medications which have left him feeling quite spry! The DJD is offset with a different prescription medication for pain. All in all, Robert is feeling so much better than he probably has in years. His foster mom reports that there are times when she can hardly believe that he has any joint issues at all, particularly when he ascends the sofa with ease.

Although making great progress in ESRA’s care, looks can be deceiving. Robert does still have a heightened sensitivity to pain in his back end. His foster family and veterinary caregivers have learned that he does not like to be touched there, and they have learned this first-hand from Robert when he politely, yet firmly, alerts those trying to assist him with a healthy growl. He has never bitten, nor attempted to bite, but he’s not shy to share that he prefers not to have certain parts of his body touched, and this is the only way that he can communicate this. To comply with his requests, his foster family has learned how to pick him up (e.g. when putting him into a vehicle) so that excessive pressure is not placed in the region that tends to generate pain. By being mindful of his comfort, it has literally been months since they have even heard a growl.

This sweet boy loves other dogs and has been wonderful with the other resident canines in his foster home. A relative also brings a German Shepherd puppy to visit and Robert loves playing with her. After a long day of play, he is content and exhausted.

Are you looking to add a loving senior to your pack or quiet home of adults only? This little man loves the attention of his human and snuggle time. He’s a lover of tennis balls, has no bad habits, doesn’t beg at the table, and isn’t much of a barker. He is full of personality and is feeling great, thanks to the loving care he’s received with ESRA volunteers.

The ideal home for Robert would be in a home with not too much activity, a single-story residence, with someone willing to administer his daily medications as needed to keep him feeling good, and with someone who has patience for a dog who is blind. Other dogs would be fine if they would not subject Robert to pressure on his back end. For this reason, we stress that a home with small children will also not be considered, as a precaution to minimizing risk of discomfort. A set of doggy stairs to aid him in getting up and off the furniture would also be helpful.

Robert’s new lease on life has been in the making for the past few months, and we would love nothing more than to see him find a very special loving “Forever” home. If you are interested, please read his Available Dogs bio and fill out our online adoption application.

Back to All Dogs
Donate